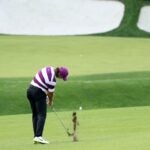 Tommy Fleetwood is signing with a deal with TaylorMade for the 2021 season.

New equipment deals won’t go into effect for most pros until the beginning of next year — unless your name is Tommy Fleetwood. The world No. 17 was unveiled as the newest member of TaylorMade’s staff in a lighthearted teaser video posted on the equipment manufacturer’s social media channels on Monday.

Without an equipment contract in place, Fleetwood didn’t have to wait until Jan. 1 for his deal to become official. Fleetwood is the latest high-profile equipment free agent to sign a deal after playing the last four-plus years without a club contract.

The sight of Fleetwood and TaylorMade linking up shouldn’t come as a surprise to those who follow the gear industry.

The Englishman was the first pro to use a custom set of custom TaylorMade P7TW irons in competition, even beating the 15-time major winner who designed them to the punch. While Fleetwood has spread the gear love recently — employing Callaway, TaylorMade, Titleist and Srixon equipment — TaylorMade has remained a constant during much of his time as a free agent.

All of our market picks are independently selected and curated by the editorial team. If you buy a linked product, GOLF.COM may earn a fee. Pricing may vary. Financial terms of the deal were not disclosed and TaylorMade has yet to send out an official press release, which means we’ll have to wait and see if this winds up being a full bag deal with golf ball included, or an agreement that offers some flexibility with the setup.

Fleetwood is one of the last holdouts from Nike’s now-defunct equipment staff that used to boast Fleetwood, Woods, Brooks Koepka, Rory McIlroy, Tony Finau, Paul Casey, Patrick Reed and Francesco Molinari. Most of those names have since gone on to sign deals elsewhere, outside of Koepka, Casey and Scottie Scheffler, who continue to play without a staff deal in place.

With Fleetwood in the fold, TaylorMade’s staff now boasts six of the top 20 golfers in the Official World Golf Ranking.

Jonathan Wall is GOLF Magazine and GOLF.com’s Managing Editor for Equipment. Prior to joining the staff at the end of 2018, he spent 6 years covering equipment for the PGA Tour.

Machinery and equipment sector can profit from digitisation