The last time we wrote news about Baikal Electronics, the Russian company was offering MIPS-based processors, but they’ve now announced that several iRU-branded desktops and one all-in-one computer had been introduced with Baikal-M octa-core Cortex-A57 processor with Mali-T628 GPU, and support for up to 32GB DDR4 RAM, up to 3TB HDD.

The computers target the Russian market, especially business to business (B2B) and business to government (B2G) customers, with the use of Astra Linux distribution that contains Russian “data protection tools” such as ViPNet SafeBoot, PAK Sobol, and others.

The company says the systems are offered with up to 32 GB DDR4 DIMM memory, up to 1TB SSD storage, and up to 3 TB HDD storage, but not much else information, also from the photo those looks like standard computers.

Since I don’t know Russian at all, I went to look for information on the Baikal-M processor directly from Baikal Electronics website to get a better understand of what’s under the hood. 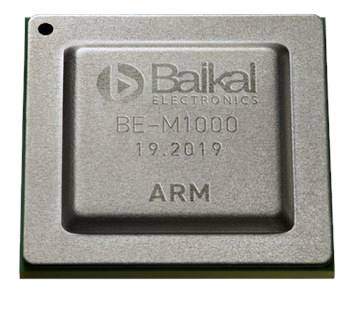 Baikal-M appears to be a family of Arm processors, and the exact part name is Baikal BE-M1000 with the following key features and specifications:

There’s all you need to make an Arm PC with support for up to 32GB RAM, two SATA interfaces, USB 3.0, PCIe, etc…, as well as 10GbE interfaces that make it suitable for microservers, and a good amount of I/Os for embedded systems. The processor is clearly not optimized for low power with a fairly high TDP, maybe because of the 28nm manufacturing process.

The AiO computer runs Astra Linux Special Edition with “myoffice_ru” Russian office application package, and some unnamed web browser and email client, all approve by the “Ministry of Telecom and Mass Communications” as required for the work of civil servants in Russia.

We should not expect to see those for sale outside of Russia any time soon, and I’m not sure they’ll sell to individuals considering the B2B and B2G markets targeted by the new computers. Looking ahead, server company Yadro and silicon design company Syntacore have joined hands to develop RISC-V processors for computers, laptops, and servers for the Russian market with the goal of having RISC-V government and education systems by 2025.

Jean-Luc started CNX Software in 2010 as a part-time endeavor, before quitting his job as a software engineering manager, and starting to write daily news, and reviews full time later in 2011.

This website uses cookies to improve your experience while you navigate through the website. Out of these cookies, the cookies that are categorized as necessary are stored on your browser as they are essential for the working of basic functionalities of the website. We also use third-party cookies that help us analyze and understand how you use this website. These cookies will be stored in your browser only with your consent. You also have the option to opt-out of these cookies. But opting out of some of these cookies may have an effect on your browsing experience.
Necessary Always Enabled
Necessary cookies are absolutely essential for the website to function properly. This category only includes cookies that ensures basic functionalities and security features of the website. These cookies do not store any personal information.
Non-necessary
Any cookies that may not be particularly necessary for the website to function and is used specifically to collect user personal data via analytics, ads, other embedded contents are termed as non-necessary cookies. It is mandatory to procure user consent prior to running these cookies on your website.
SAVE & ACCEPT